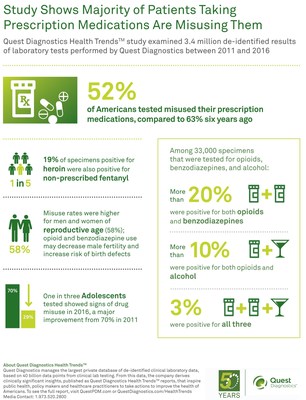 The Quest Diagnostics Health Trends™ study is based on analysis of the company's de-identified laboratory data, believed to be one of the largest nationally representative datasets of objective laboratory information of patients prescribed opioids and other commonly abused medications. Physicians order laboratory services to aid their ability to monitor patients for signs of prescription or illicit drug misuse or abuse.

The report, titled "Prescription Drug Misuse in America: Diagnostic Insights in the Growing Drug Epidemic," was released today at the medical conference PAINWeek 2017, being held September 5-9 in Las Vegas. The examination of 3.4 million prescription medication monitoring lab tests performed by Quest Diagnostics between 2011 and 2016 paints a stark picture of the continuing epidemic of prescription drug misuse, and the dangerous, potentially deadly patterns of that misuse.

To access the study and an interactive data depiction, visit QuestPDM.com.

The study found that while evidence of misuse has declined in recent years, 52 percent of test results showed evidence of potential misuse in 2016, suggesting a majority of patients took their prescribed drugs in ways that were inconsistent with their physician's instruction. By comparison, in 2011, 63 percent of test results were inconsistent with a physician's orders.

"Over the past several years, federal and state government, clinician organizations, public health advocates and providers have all launched campaigns to educate the public about the perils of prescription drug misuse, which hypothetically should have yielded a significant rate of improvement. Yet our study shows that every other American tested for possible inappropriate use of opioids and other prescription drugs is potentially at risk," said lead author F. Leland McClure, PhD, MSci, F-ABFT, director, medical science liaison, medical affairs, Quest Diagnostics. "This finding is rather shocking, and speaks to the challenges of combating the nation's drug misuse epidemic."

The study also found disturbing patterns of concurrent drug use.

Opioids and benzodiazepines depress the central nervous system. When combined, respiratory suppression, cardiac distress and even death by overdose can occur. While physicians may prescribe the two drugs together for some patients, the practice is generally regarded as risky; in August 2016 the United States Food and Drug Administration (FDA) issued a "boxed warning" on prescription opioids and benzodiazepines alerting prescribers to the dangers of concurrent use. According to the Centers for Disease Control and Prevention (CDC), more than 30 percent of opioid-related deaths also involved benzodiazepines.

The study also found that one in five (19%) specimens positive for heroin in 2016 was also positive for non-prescribed fentanyl. Fentanyl is 50-100 times more powerful than morphine. When combined with heroin, fentanyl heightens the risk of drug overdose death.

"Accidental drug overdose is a serious problem in the United States. It appears from our analysis that many patients may be at risk of overdose or other adverse health effects caused by concurrent use of opioids including fentanyl and other drugs such as benzodiazepines," said Jeffrey Gudin, MD, medical advisor, Quest Diagnostics, and Director, Pain Management and Palliative Care, Englewood Hospital and Medical Center, New Jersey. "Opioid prescribing guidelines issued by the CDC in 2016 advocate for drug testing patients prescribed opioids to monitor for potential misuse. These guidelines also recommended limiting benzodiazepines simultaneously to avoid dangerous drug interaction. Careful vigilance by prescribing physicians may help to offset some of the risks for patients who may be unaware of the dangers of combining these and other medications."

Quest researchers found drug misuse rates were high among most age groups and both genders. However, adolescents (10 – 17 years of age) showed a striking improvement, with the inconsistency rate dropping from 70% to 29% between 2011 and 2016.

Misuse rates were even higher for men and women of reproductive age (58%) than in the general study population (52%). The findings are significant because opioid and benzodiazepine use may decrease male fertility and, if taken during pregnancy, increase the risk of birth defects and other health concerns.

To access the study, including methodology, strengths and limitations, visit QuestPDM.com.

Quest Diagnostics is one of the largest providers of prescription drug monitoring services in the United States. Services include testing for commonly prescribed drugs, including opioids and other pain medications, central nervous system depressant medications, and certain illicit drugs, such as marijuana (which is illegal in most states), cocaine, and heroin. The company is also a leader in workplace drug testing.

The company's Quest Diagnostics Health Trends studies are performed in compliance with applicable privacy regulations, based on de-identified data, according to the company's strict privacy policies and as approved by the Western Institutional Review Board.

About Quest Diagnostics
Quest Diagnostics empowers people to take action to improve health outcomes. Derived from the world's largest database of clinical lab results, our diagnostic insights reveal new avenues to identify and treat disease, inspire healthy behaviors and improve health care management. Quest annually serves one in three adult Americans and half the physicians and hospitals in the United States, and our 43,000 employees understand that, in the right hands and with the right context, our diagnostic insights can inspire actions that transform lives. www.QuestDiagnostics.com.

50th Anniversary: In 2017, Quest Diagnostics celebrates 50 years of life-changing results. To learn about our legacy of accomplishments and quest to improve healthcare in the future, visit www.QuestDiagnostics.com/50Years