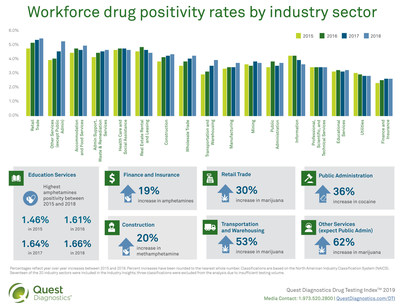 SECAUCUS, N.J., Sept. 11, 2019 /PRNewswire/ -- One third of U.S. industry sectors experienced year-over-year double-digit increases in workforce drug positivity between 2015 and 2018, according to a new analysis of industry-specific data by Quest Diagnostics (NYSE: DGX), the world's leading provider of diagnostic information services. The findings will be presented at the Substance Abuse Program Administrators Association (SAPAA) conference in Philadelphia, PA on September 18, 2019.

The company's analysis of more than 14 million urine drug test results provides industry specific insights based on objective lab data identifying the presence of several drugs, including marijuana, amphetamines, cocaine and opiates across a nationally representative workforce population. Among these, the Retail Trade industry experienced the highest overall positivity rate (4.7% in 2015, 5.1% in 2016, 5.3% in 2017, and 5.4% in 2018) across all four years of the analysis. As compared to the national positivity rates, the positivity rates in Retail Trade exceeded the national positivity rate for the general U.S. workforce in the most recent three years (4.9% in 2016, 5.0% in 2017, and 5.1% in 2018), as reported earlier this year in the company's 2019 Drug Testing Index, which examines drug positivity generally across the U.S. workforce.

Additionally, Retail Trade is one of six sectors that saw year-over-year double-digit increases in positivity between 2015 and 2018. Five of these experienced an overall four-year increase in general U.S. workforce positivity more than double that of the national increase (6.2%) over the same time period:

"Our longitudinal examination of drug positivity data suggests drug use by the nation's workforce is growing across a broad swath of industries," said Barry Sample, PhD, senior director, science and technology, Quest Diagnostics. "Of particular concern are sharp jumps in positivity rates seen in sectors like transportation and warehousing and construction that directly affect public safety. Staying vigilant and providing support for employees who test positive for drug use are key for employers seeking to maintain a safe, healthy workforce."

Classifications are based on the North American Industry Classification System (NAICS), used by the U.S. Office of Management and Budget, Canada, and Mexico to group organizations into industries based on the similarity of their production processes. Seventeen of the 20 industry sectors were included in the Quest analysis; three classifications were excluded due to insufficient testing volume.

Marijuana positivity increases in nearly half of industry sectors

Despite having the highest marijuana positivity rates for each of the four years analyzed, Accommodation and Food Services had the largest decline (-17.3%) in general U.S. workforce urine drug tests that included marijuana between 2015 and 2018.

"Marijuana use is a complex issue, and drug testing provides an objective view into its use in the workforce. Testing data reveals continual increases in positivity rates across several drug categories and industries. Our hope is that data-driven insights on drug use will inform better approaches to ensure the safety and health of the nation's workforce and the communities they serve," said Kim Samano, PhD, scientific director, Quest Diagnostics.

A 2016 Joint Guidance Statement of the American Association of Occupational Health Nurses and the American College of Occupational and Environmental Medicine noted the "potential consequences of marijuana use in the workplace include the risk and associated cost of adverse events and the loss of productivity."

In comparison to marijuana, positivity for opiates continued to decline. Eight of the 17 sectors showed year-over-year decreases at rates of 25 percent or more between 2015 and 2018. No sector experienced an increase in positivity from 2016 to 2017 or 2017 to 2018. Opiates are narcotic drugs that act as depressants on the central nervous system and refer specifically to morphine and codeine.

About Quest Diagnostics Drug Testing Index™
The Quest Diagnostics Drug Testing Index™ (DTI) is a series of reports that provide insights into trends in workforce drug use, based on positivity results for deidentified laboratory testing performed by Quest Diagnostics for a range of illicit, legal and prescription drugs. It examines test results according to three categories of workers: federally mandated, safety-sensitive workers; the general workforce; and the combined U.S. workforce. Federally mandated, safety-sensitive workers include pilots, bus and truck drivers, and workers in nuclear power plants, for whom routine drug testing is mandated by the U.S. Department of Health and Human Services. Quest Diagnostics has analyzed annual workplace drug testing data since 1988.

The strengths of the DTI analysis include its large, nationally representative sample size, longitudinal monitoring, a testing population that is generally reflective of the U.S. workforce and the quality of the company's drug testing services to confirm positive results. Limitations include analysis only of employers that perform drug testing with the company, state-level industry demographics that may be partially reflective of regional drug use, and a lack of exact cross-specimen comparisons due to variations in substances for which employers test. Quest Diagnostics has analyzed annual workplace drug testing data since 1988 and publishes the findings as a public service. For an interactive map examining positivity results in the combined U.S. workforce results by three-digit Zip Code, visit www.DTIDrugMap.com.

In addition to workplace drug testing, Quest is a leader in clinician-ordered drug testing services to aid the detection of potentially dangerous forms of prescription and illicit drug use.

About Quest Diagnostics
Quest Diagnostics empowers people to take action to improve health outcomes. Derived from the world's largest database of clinical lab results, our diagnostic insights reveal new avenues to identify and treat disease, inspire healthy behaviors and improve health care management. Quest annually serves one in three adult Americans and half the physicians and hospitals in the United States, and our 46,000 employees understand that, in the right hands and with the right context, our diagnostic insights can inspire actions that transform lives. www.QuestDiagnostics.com.